Dogs are very adorable, and you know when they get annoying? No doubt, it’s when they fight with your other pet dogs! If you are tired of dog fighting with other dogs of your household, you are in the right place!

So if you can keep your dogs stress-free, they won’t fight anymore if you are lucky. You can manage the environment for your dog to stop fighting.

But there are more issues with dogs that you may face. Today, we will share everything in this regard. Read on, and you will know how to stop dogs fighting and the reasons behind this.

Now, as a pet owner, being disheartened because of your pet dogs’ aggressive behavior is usual. But how to stop the fighting?

Yes, it’s time to put an end to your dogs’ aggressive behavior. Let’s know the ways to stop your pet dogs’ fighting with each other.

Way-1: Do Not Tolerate The Aggression Being naturally aggressive, dogs find confidence when they can show aggressiveness towards other dogs. This makes them feel supreme and the alpha dog among the other dogs.

But if you do not make him/her understand that you don’t like this behavior through your body language, he/she will continue to do this.

So what you have to do is, show him/her in the best way that you do not like this behavior. But do not hit your dog. You can show him by your body language and voice tone.

As dogs are faithful to their owners, he/she will realize his mistake and won’t repeat the behavior again.

Also, do not shout at the dog who didn’t start the fight. You need to understand who induced the fight first. And afterward, take actions according to that.

Way-2: Notice When They Start Fighting There can be some situations when your dogs tend to fight more. For instance, it can be when you get them something to play. It can be because of jealousy when you pet one of them more.

Moreover, it can be out of excitement because of your gift or treats. But no matter what the reason is, you need to understand that well and take actions likewise.

Besides, what you can do is, do not treat any of the dogs individually in front of the other dogs. If you pet one of them more, it can build up to jealousy among other dogs.

As a result, they will pick up fights. Furthermore, bring individual toys for each of them to not fight because of the toys. If your habit is to put food for them in one place, then they might fight to eat more than each other.

That will create an annoying situation. Moreover, if some of the dogs are not aggressive enough, they will not get any food or leftovers.

Also, do not feed different foods to them. Always give similar foods in the same quantity to the dogs. Your dogs can fight in the same household if you let them sleep together. It’s always better to keep their sleeping places separate from each other. As a result, they cannot disturb each other while sleeping.

Dogs are very conscious even when they sleep. So a simple inconvenience can create a huge fight among them, which will ruin your sleep as well.

If you want to make sure your dogs stop fighting, either separate their sleeping places or keep a certain space for each of them. In the action of stopping dog fighting in the Same Household, this is one of the most crucial steps you need to take. Often, dog owners notice that their dogs start fighting when there is a new pet at home. So if you bring a new pet or dog, there are possibilities that the older one will get jealous and pick fights. To avoid that, you have to create a bonding between those two.

Moreover, you need to make both dogs or pets feel that they are each other’s companions, and they are not harmful to each other. Making friendships between those two can reduce the fight.

My dogs have lived together for some time Some dogs love them, while others cringe away from being kissed on the cheek. Ultimately, your dog’s reaction is likely based on their personality and past experiences with kisses from humans. You must get your dogs used to each other’s personalities and quirks as soon as possible.

This way, when you leave them apart for a while, they won’t be as stressed out and maybe happier when you come back. Start by introducing them to each other gradually, and take things step by step. Consider things like playing together, going for walks, and getting acquainted with each other’s favorite toys. After a while, you can start training them to live together peacefully and harmoniously. If you’re the proud owner of two dogs and you’re contemplating adding a third, you must consider all factors — your family dynamics, your pets, and what size the third dog will be. It is by no means an easy decision.

First, before you decide to add a third dog, think about your family and how they will react to the new addition. Research suggests that most families are happier with two dogs, and adding a third can be challenging. The research shows that only one-third of families who adopt a third dog say they’re happy with their decision.

How to Stop Dogs From Fighting in Your Household Dogs are pets and companions that we love dearly. We want to keep them safe and happy, but sometimes they will fight. Here are some helpful tips on stopping dogs from fighting in your household:

How to Prevent Resource Guarding in a Multiple-dog Household Why Do Dogs Fight In The Same Household? Dogs are naturally born with an aggressive nature. Now, your house dogs might be fighting because of a lot of reasons. Let’s find out why your beloved dogs are fighting:

How To Keep Dogs Separated In The Same House? 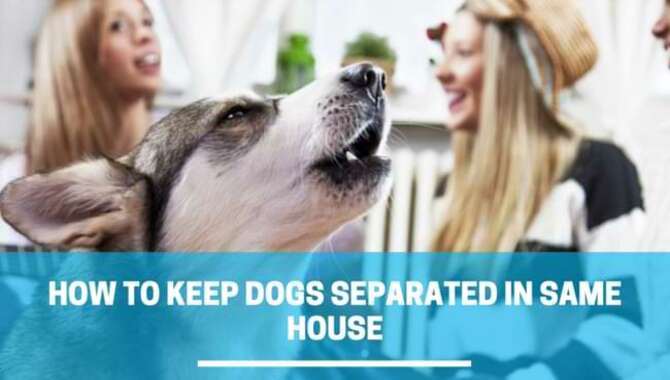 But those aggressive fights can get worse sometimes. So it’s better to keep your dogs away from each other, who are most likely to fight.

Dogs are most likely to fight with the same gender. Male dogs occasionally fight with each other. Most of these fights occur among female dogs.

The fights between female dogs can be aggressive and last longer. So it’s better not to have more than one female dog in the house.

The best way to end your dog’s fight is to keep them away from each other and handle the situation properly.

Make a habit of your dogs of separation by placing them in two different places away from each other, but make sure to let them know you are still around.

You can create both dogs or crate them one by one by rotating days. But make sure that one of your dogs is created if the other one is left loose.

Make your dog’s room or create comfortable and make sure to provide enough food, water, and toys. If you are going out for too long, then try to find any other way to keep your dogs separate from each other.

If you see your dogs regularly fight aggressively, then contact the vet for long-lasting solutions.

How To Discipline A Dog After Fighting? Now, as your dogs have to live together even after fighting, you need to know how to discipline them. Here’s how you can discipline your dogs after their fight:

If you own more than one dog, then you might be familiar with the pain when your dogs fight. Dogs are normally friendly, loyal, and enthusiastic-natured.

They are easy to pet. But when dogs fight, it can turn into an aggressive one. So, we assume that you got the perfect answer to your question: How to stop dogs from fighting in the Same Household?

You need to follow everything that we have shared here properly. And make a rule of punishment if your dogs fight more often. Then they will be afraid of the punishment, and they won’t pick up fights.

Also, use tricks like showing angry body language and raised voices to make them understand that you don’t like when they fight. Thus you can get rid of your dog’s fighting problem.

Usually, diarrhoea occurs when the dog’s digestive system cannot properly absorb the food it eats. This can happen for various reasons, including a lack of hydration, infection, or overfeeding.

Some dogs sleep with their bum facing outwards because they trust and love their humans so much that they feel comfortable knowing their human is always close by.

Yes, most dogs can live together after fighting. Some dogs are less aggressive and have a higher tolerance for other dogs. It is more likely for a dog to get its instinctual need for dominance met in these cases

The best way to stop this is to keep your pet company with a new person. This spares you from having to help break up or separate the two animals and prevents further resentment that could develop over time.

Try trying to distract them with something like two bone-shaped objects or squeaky toys they might be attracted too. If you cannot stop the fight, try to separate one of the dogs from the other by grabbing the scruff of his neck and lifting him into a comfortable position.